At the launch of the Words and Verses Project, there is only one composer attached, who is also the founder and project director. Learn more about this individual here.

However, a music project that takes on such a vast and all-encompassing source of material as the Holy Bible has the potential for several future albums, with music crafted by any number of composers. If you are one such writer and this concept is already sparking ideas in your brain and in your spirit, read on. 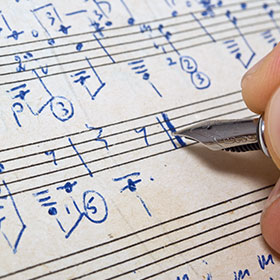 One man, one visionary, one composer started this Words and Verses endeavor. But to truly capture the Word of God through music, one single foundational album isn't going to be enough. In time, to fully explore the "Bible music" project concept, multiple albums will be needed. And to that end, more than one composer. Ultimately, we could see this project spanning several genres, with several scopes of instrumentation and orchestration, from cohesive explorations of a single flavor to releases that are diverse and sprawling in nature. The founding vision is that there will be room for a variety of talent, all contributing for sake of the mission that the music composed for this project will help to spread the profound truths represented in the Bible.

Are you one such composer? Does this project interest you? Would you like to contribute, when the time comes? Excellent! Continue reading.

The scope of this project is still to be determined. And given the gravity of the subject matter, the inclusion of talent - composer or otherwise - will not be taken lightly. There are a few aspects - truly of any album, really - that must be considered before we can officially assign someone/anyone as an official contributor to the project.

This goes without saying, but for music to be considered of caliber high enough for publication, it must be of significant quality. This is a tricky one considering it's subjective, but the plan is for there to be a review process of all submitted material, both for compositional excellence, as well as production and sound quality. In time there -may- be a budget available for production/mixing assistance, or eventually even perhaps for the recording of live/orchestral instruments, but at the start of the project we'd be looking for delivery of tracks that are already properly recorded, and mixed.

We say it over and over again throughout this website, but the scope of this project—and all the potential albums that can be developed—is still being determined. If multiple composers get involved, then the complexity involved in assembling an album increases. Say we get a collection of talented composers on board. Then what? Do we craft an album representing a Biblical theme? Do we assemble a collection of tracks developed in a consistent genre? Do we aim to do both at the same time? At this point, we don't know. But it's an important matter to consider; after all, if we get a bulk of qualified composers who are submitting excellent work, all in the classical/orchestral genre, and then we get a solo composer who submits a phenomenal work in a bluegrass motif, well, practically speaking it would be difficult to make the latter fit, you know? 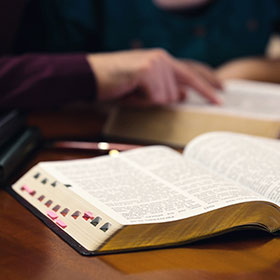 Another aspect of this project that is reinforced repeatedly throughout this site is the significance and importance of the material represented in the project concept: the Holy Bible. For a composer to jump in and craft a piece of music that represents a Bible verse, then we want to feel fully confident that said composer really understands and -respects- that verse. We don't exactly want music writers joining the project simply because the concept sounds cool, then quickly grabbing a verse that means nothing to them, solely so that they can be a part of it. Rather, if you're going to take the time to compose an entire piece that embodies the Word of the Lord, it should really be something that is personal, a verse that means something, a verse that has helped you or is your go-to for a a particular time of need. A verse that explains your faith, something you recall as a source of strength and confidence, or perhaps a verse of peace and reassurance. Whatever it is, it should be taken seriously.

If you're a composer interested in making scripture-based music for the Words and Verses Project, you've read the above, and you're still on board, great! Fill out the form below and a project representative will be in touch.

Remember, at this point we make no guarantees regarding involvement, we are simply measuring interest.